Anthony Le Donne is a young scholar who has tackled some tough subjects.  In this particular book he addresses the question recently on a lot of minds: Was Jesus married?  The book is entitled: The Wife of Jesus: Ancient Texts and Modern Scandals.  It is published by Oneworld Publications in London.  The first copyright is 2013 so I’m a bit late telling you about it. 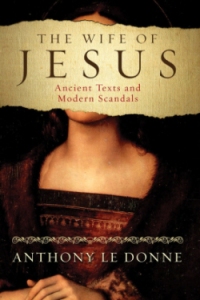 Although the question whether Jesus was married has been around a long time, Dan Brown’s The Da Vinci Code certainly kindled everyone’s imagination.  If you’re prone to sensational readings of history and wish to see conspiracies under every rock, then Brown is your guy.  More recently ,the announcement and publication of the badly named Gospel of Jesus’ Wife made it a matter of scholarly concern.  I’ll have more to say about that later, but what Le Donne has done is to take a controversial subject and make sense out of it historically and socially.  Perceptively, he notes that the modern response to the question—whether excitement or repulsion—has more to say about us than it does the historical Jesus.  In many ways the question of whether Jesus was married and how we respond to it provide a mirror of ourselves and our times.  In the final chapter he writes: “This book, in large part, has been about ancient and modern attempts to project sexual identities onto Jesus” (p. 147).

Le Donne examines a wide variety of texts from the ancient world,  accounts about the asceticism of John the Immerser in the NT Gospels to non-canonical accounts which some people take to describe an intimate relationship between Jesus and Mary Magdalene in the Gospel of Philip.  Le Donne reads widely in Greek and Jewish sources contemporaneous with Jesus and in the first half of the Christian century.  He seems to be able to argue for it—yes, it is likely Jesus was married as was typical of most Jewish men­—and against it­—no, there is no solid historical evidence he was married.  As a historian, Le Donne knows the difficulty of arguing from the general to the particular.  What is true of most people is not necessarily true of a particular person.   Though most Jewish men married between the ages of 20 and 30, not everyone did.  There was already an impulse toward asceticism and self- denial in Jesus’ day.  John the Immerser and the desert covenanters of Qumran appear to offer contemporaneous examples.

Le Donne offers a helpful construct for what was typical of Jewish males in the first century.  The term he uses is “civic masculinity”; it represents the gender role most Jewish men would play in their day.  It would include things like marriage and having children, working a trade and taking responsibility for one’s economic well-being, passing the faith along, seeking to own and work the land, etc.  Jesus, according to Le Donne, may have been raised to accept this role, but he may have subverted it in his public ministry.  Jesus , he says, “invested in the two-sided coin of economic disobligation and celibacy.”  Such a lifestyle was probably considered “crazy” by ancient standards and “anti-family” by modern.

Mark Goodacre, NT Professor at Duke University, says it well: Le Donne’s book is “a crystal-clear, compelling yet historically robust account of what we can and can’t know about the wife of Jesus.”