Here is a book review I wrote that appeared in the journal Interpretation (2011).

Did the First Christians Worship Jesus? The New Testament Evidence 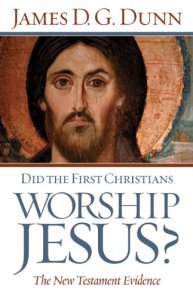 For over two decades scholars on both sides of the Atlantic have been involved in a vigorous debate over the origin and nature of early Christian devotion to Jesus.  James Dunn has been and continues to be one of the major voices in that dialog.  He dedicates this book to Professors Richard Bauckham and Larry Hurtado, two scholars who have argued that Jesus was worshipped early in Jewish Christian circles within a monotheistic context.  Dunn analyzes the NT evidence and draws a different conclusion. Although Dunn at first appears to answer the question with a qualified “yes,” he comes finally to a qualified “no”: “No, by and large the first Christians did not worship Jesus as such” (150—italics added).  Dunn’s ambivalence is evident throughout the book. He often remarks that the early Christians’ language and disposition toward Jesus is striking, remarkable, and without precedent in Judaism. Still he finds that the reverence addressed to Jesus is of a different order than reverence addressed to God.

After exploring the relevant language of worship (ch. 1) and the practice of worship (ch. 2), Dunn investigates (ch. 3) potential antecedent traditions within second temple Judaism (e.g., the angel of the Lord, Spirit, Wisdom, Word, and exalted human beings) which might permit the worship of Jesus within a monotheistic setting.  Finding none, he turns his attention to the NT evidence itself (ch. 4): Jesus’ self-understanding; the central claim that Jesus is Lord; the use of Yahweh texts to refer to Jesus (e.g., Phil 2:6-11, 1 Cor 8:6); Logos, Wisdom, and Spirit Christologies; Jesus as god/God; the contribution of John’s apocalyptic vision in Revelation; and various other themes.  Dunn concludes this chapter with a critique of Bauckham’s proposal that the NT texts indicate that early Christians included Jesus within the “divine identity.”  Citing the confusion associated with the language of “identity,” Dunn argues that “equation” is a better way of saying “that if Jesus is God he is not YHWH.”

As the conclusion makes clear, Dunn is concerned not only with the historical question but with two modern, theological problems: (a) the worship of Jesus to the neglect of God the Father and (b) the challenge of interfaith dialog.  By looking at the earliest available evidence, Dunn hopes “to clarify what lay behind the confession of Jesus as the Son of God in Trinitarian terms” (1).

Few people are able to marshal the depth, breadth, and height of historical questions as skillfully as James D. G. Dunn.  His mastery of texts, critical judgment, and ability to make complicated matters accessible to a wide audience make him one of the most compelling voices in the study of Christian origins.  Not everyone will agree with all of Dunn’s conclusions—including this reviewer—but he raises the relevant issues which require us to think and rethink the status accorded Jesus in our faith.