I am a card-carrying member of The Early High Christology Club (EHCC).  Well, in the spirit of full disclosure we don’t actually have cards, we have a mug.  It is a highly sought-after prize.  If you are mug-worthy and see one, do everything you can short of stealing it to get one.  Carey Newman of Baylor University Press, also an EHCC charter member, made the first investment in the mugs.  A bit of explanation is in order. 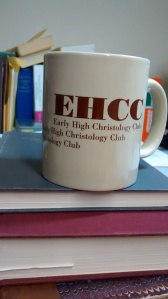 The Early High Christology Club is a loose affiliation of scholars who have written books or articles arguing that the early followers of Jesus—as early as we have evidence—had a high Christology, that is, their assessment of his significance included that he was, in some sense, divine. Now this is actually an historical conclusion based on our reading of the literary evidence; it does not depend on any confession. The earliest evidences we have in the New Testament or any Christian sources are the letters of Paul; so much of this historical construct has been built upon a close reading of his letters.  There are all sorts of issues involved: how did Paul and other NT writers express their “Christology”? what kind of language was used? where did that language come from?  how does this comport with their reading of the Christian Bible, the Septuagint? how early is “early”? how high is “high”? –how did these early Jewish Christians regard Jesus as divine without setting aside their monotheistic heritage?  Paul, for example, claims to be a monotheist and yet he appears to regard Jesus as divine (e.g., 1 Cor 8.6; Phil 2:5-11).  If Jesus were divine, then did early Christians worship him?  If so, did they worship him the same way they would have worshiped God?

Not all people agree, of course, with the members of the EHCC.  There is the Late, Low and Slow Club (LLSC)—though I don’t think they have a mug—which concludes that the early followers of Jesus regarded him as a human being only. Many decades later when Christianity moved beyond the constraints of its Jewish heritage, Christians began to regard Jesus as divine. The LLSC posits a lengthy period of development from a low to a high Christology, anywhere from 60 to 100 years.   Now, members of the EHCC also posit a period of development in the Church’s Christology, but they think this development happened rapidly, perhaps even within a few years after Jesus’ crucifixion.

The EHCC meets regularly and informally at the annual meeting of the Society of Biblical Literature.  Carey Newman and Larry Hurtado, distinguished (now retired) Professor of New Testament and Christian Origins at the University of Edinburgh, co-sponsor the annual gathering.  Carey provides the room.  Larry brings the food and drink.  Stories are told.  Friends catch up. There is a lot of laughter.  At a given moment in our gathering someone recites our founding myth.  Some who have heard it say that it is so good it cannot possibly be true; but those of us who were there know it happened just as we say.