by David B. Capes

I’m working on a book entitled The Story of the Voice.  Thomas Nelson will publish it in spring 2013. It will tell the story of how the Voice Bible came to be, talk about the people and the process, and discuss some of the translation decisions we made.  As I was researching for the book, I came across a paragraph in a book by Gordon Fee and Mark Strauss entitled How to Choose a Translation for All Its Worth (Zondervan 2007).  It is a terrific book, one I highly recommend if you interested in Scripture.

In a section on translating idioms I found a fun paragraph I want to share with you. 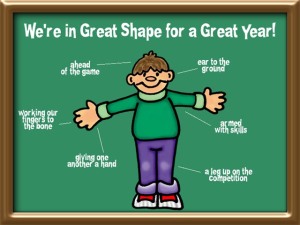 First, let’s talk about idioms.  Every language has them, some more than others.  English has a lot.  Hebrew and Greek, the major biblical languages, have them as well.  They present one of the greatest challenges for translators.  So what is an idiom?  Here is the definition given by Fee and Strauss: “an expression whose meaning cannot be understood from the combined meanings of the individual words.”  If a person stays too late, he might say before he goes: “I need to hit the road.”  Now native English speakers will know exactly what that means: “I need to leave now.”  But a person who is taking each word literally might ask, “Why do you need to hit the road?  What has it done to you?”

I remember one of the first idioms I came across while studying Greek.  In Mark 1:32-34 the writer says—if we read it literally—that Jesus healed “those having badly.”  Now you might be able to figure out what that means but that would certainly not be the way we’d say it.  The Greek idiom “those having badly” means “those who were sick.”

Here is a paragraph which is a lot of fun (if you are a word-geek like me).  How many idioms do you see?

My career has seen better days.  I was skating on thin ice at work, scraping the bottom of the barrel, and ready to say uncle.  The boss and I did not see eye to eye, and he told me to shape up or ship out.  There was no silver bullet.  It was a safe bet that I was going to sink or swim.  Nobody could save my bacon.  My smart-aleck colleague was a stick-in-the-mud and a snake in the grass who would sell me down the river as soon as shake a stick at me.  I could smell a rat, so I steered clear of him. I had one slim chance.  It was a shot in the dark, but if I could keep a stiff upper lip, stick to my guns, and sail close to the wind, I would get a second chance.  The saving grace was that at the last minute I got a second wind and was saved by the bell.

Now don’t look too deeply for any great meaning in that paragraph.  It only illustrates how many idioms we use on a regular basis.  Those of us who translated The Voice had to be aware of the Greek and Hebrew idioms.  We had to figure out how in English to express their meaning to our modern audience.  Often you can figure out what an idiom in another language means, but you have to think about it.  It is often like a riddle.

So now it’s your turn.  Can you think of an idiom you have heard in English?  Do you have a favorite?  Have you ever used an idiom (in English) and had a non-native speaker look at you as if you had lost your mind?  By the way, how many idioms have I used in this blog?  If you have a lot of time on your hands, rewrite the paragraph above and say plainly what each of the idioms mean.  See if you can do it.  It is harder than you think.