A Man Attested by God

Daniel Kirk has written an important new book entitled A Man Attested by God: The Human Jesus of the Synoptic Gospels (Eerdmans 2016).  At the heart of his project is an attempt to resuscitate an idealized humanity at the heart of the Gospels.  The tendency for many, he thinks, is to read Matthew, Mark, and Luke through the lens of John’s Gospel or of Paul’s divine Christology expressed in say, the Philippian hymn (Phil 2:6-11). 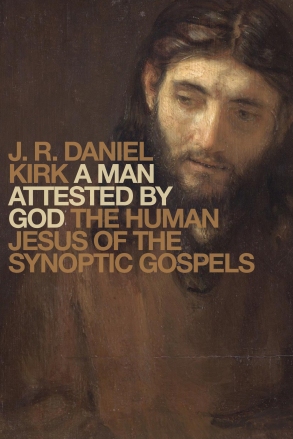 For Kirk Jesus is an extraordinary figure of history.  But he is not just extraordinary because of his deity; he is extraordinary because of his humanity.  The grand scheme of the Bible presents the God of Israel as One who does not give up on humanity.  From the beginning (Genesis) God had a great plan and vision for what humanity was supposed to be.  So Kirk proposes that the Synoptics offer a high human Christology (a play on words based on the emerging consensus of “an early high Christology”).  In this case high does not equal divine, but a fully realized and idealized humanity. In other words the Synoptic Gospels present us with a Jesus who is everything humanity was created to be.

Now Kirk doesn’t deny the orthodox picture of a divine Christ.  He just thinks the Synoptics are telling a different sort of story, a story that can be easily lost in accentuating Jesus’ divinity.  As long as we stress Jesus’ divinity, we don’t have to take seriously what it means to walk as he walk, live as lived, love as he loved.  In other words “following Jesus.”

Kirk’s monograph stands in contrast to recent work done on the Gospels by the likes of Larry Hurtado, Richard Bauckham, and even his own former teacher, Richard Hays.  But more about this in another post.

By David B. Capes in Uncategorized on September 9, 2016.
← Jesus Monotheism HGST Blog Launches →