I saw the movie “The Hobbit: An Unexpected Journey” the night of my birthday.    We entered a theater in Houston, sat at small tables, and waiters took our orders during the previews.  When the food arrived, the previews were over and in a few minutes the theater lights dimmed and for the next 2 ½ hours we were transported to Middle Earth. 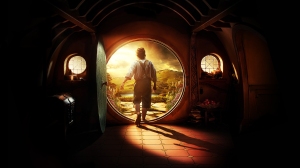 The Hobbit is a wonderful movie. I’d recommend it.  Here is the trailer: http://www.youtube.com/watch?v=SDnYMbYB-nU

The movie is a typical Peter Jackson film.  The action is well paced.  There are ample battles and tense moments throughout. Yet even during some of the battle scenes, Jackson manages to inject bits of humor to break the tension. I often wonder what Tolkien would think if we could bring him into our time to see how Jackson and others have interpreted him.

There is a wonderful bit of dialogue near the end of the movie that, for me, echoes the words of Paul in 1 Corinthians.  Throughout the movie there is pushback from the road- weary dwarves trying to make it back to their home.  They wonder aloud why Gandalf the Grey, skillfully played by Ian McKellan, has invited this hobbit from the shire–this creature who craves his books and armchair and avoids adventures at all cost—to join the band of battle-hardened dwarves on this quest to try and reclaim their home.

When you see the movie, listen for the echo.  Here is what Paul said:

For me and I’m sure many others, The Hobbit  and Lord of the Rings trilogy is a great story that reflects the reality Paul celebrates in his letter.  No one would ever consider the hobbits adventure-worthy creatures. They are not wise.  They are not powerful.  Royal blood does not flow in their hobbit veins.  They are the foolish and the weak. Yet they are chosen, indeed destined, for greatness in a story which sees good triumph over evil in Middle Earth. Yet evil, true evil, is not defeated easily.  It takes great sacrifice to overcome the powers that rule the darkness. Tolkien understood Paul.  I’m sure of it.  He understood the central Christian convictions that ought to animate more of our literature and films.