I met René Padilla a few years ago when he was visiting Houston.  Padilla is one of the best known and most influential Latin Church leaders.  He actually helped me think through the translation of a phrase in Paul’s letters normally translated “the righteousness of God” (dikaiosunē theou).  When we were working on THE VOICE translation, we decided to translate the phrase (e.g., Rom 3:21-26) “God’s restorative justice.” 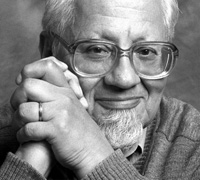 I recently read an article by Padilla in a book of essays,  Mission between the Times: Essays on the Kingdom (Grand Rapids: Eerdmans, 1985).  The last chapter in that book is “The Mission of the Church in Light of the Kingdom of God.”  It is an amazing chapter that captures, in brief, so much of what I have been thinking for years.  Although we have been influenced by different cultures, we’ve read some of the same scholars: George E. Ladd, Oscar Culmann, W. Pannenburg.

For Padilla the Kingdom of God cannot be equated with the church because it has to do with God’s redemptive purpose for all of creation.  Padilla is well versed in Jewish apocalyptic eschatology and understands the two ages of history.  He works from a framework of already and not yet, like so many who grapple with Jewish and early Christian eschatology.  Padilla is right to affirm that it is impossible to understand Jesus apart from his message, spoken and acted out, of the Kingdom of God.

This means, among other things, that the mission of the church cannot be understood apart from the mission of Jesus.  As his body, the church extends the mission he started.  So the mission of the church is twofold: to proclaim the gospel and to promote what Padilla calls “social responsibility.”  He does not understand social responsibility as a programmatic attempt by people to engineer society so that it becomes like heaven on earth.  Rather Kingdom involves God’s action in the world by the Spirit, not human action on behalf of God. On the other hand, the Kingdom of God is also not some private, interior spiritual thing that sits comfortably in the heart but uncomfortably in public.  The Kingdom is not just about God ruling over my heart.  It is God ruling as Lord of creation. All of us are invited to participate in that, because we are part of creation.

Padilla’s essays are worth reading.  Though he wrote them over 30 years, they are still worth reading and pondering.