Richard Hays, dean of Duke Divinity School and one of the top New Testament scholars in the world, was on the campus of HBU recently to give the A. O. Collins lectures in theology. He gave two lectures exploring the ways in which the New Testament evangelists read and incorporate Israel’s Scriptures into their Gospels. Hays is working on a book which will be published in the next year by Baylor University Press, so I won’t give away too much; I’ll only hint at certain things which hopefully will make the book something you want to read for yourselves. 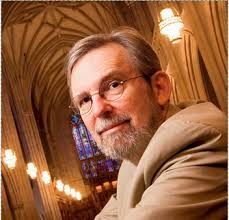 To make that more meaningful, Hays suggests that we need to understand how the NT writers went about reading Moses, the prophets and the writings. By delving into their imaginative world, Hays believes, we will be able to read the full Bible more faithfully. He calls that strategy “figural readings.” The word “strategy” is my own word and probably says too much. Strategy implies intent and planning. Figural readings were just the way they read and engaged the Scripture. It was as natural to them talking or eating.

At one point Hays said: “The Gospels teach us how to read the Old Testament (reading backwards).” Now the Old Testament is prior to the Gospels so any reading would have to be backwards. But the Gospels are full of quotations, allusions, images, and echoes of Israel’s Scripture written hundreds of years before Jesus was born. He gave several examples of how reading episodes and parables from the Gospels offer us greater and greater insight when we pay attention to the echoes of Scripture contained in these chapters. From start to finish Hays’ lecture was brilliant. Hundreds who heard it were moved and helped.

As Hays was lecturing, it struck me that the process we used in translating The Voice was a kind of “backwards reading.” In other words we began with the New Testament, translated it; then we turned our attention to the Old. Now this is often the kind of things translation committees do. Why? Well, the New Testament is only about ¼ the size of the Old. You can get it done more quickly. Plus, it is not uncommon to see the New Testament published alone, without the Old. In Christian circles you never see the Old Testament without the New.

But our backwards reading-translation meant that along the way, we had to make certain adjustments to how we thought about certain words, phrases, indeed entire books. By reading the Old Testament with New Testament eyes we do what the church has been doing since the first Jesus-followers struggled to make sense of what had happened among them. When we allow the Gospels and other New Testament books to guide our reading of Israel’s sacred texts, we are joining the saints of old in a noble enterprise which will enrich our lives and instruct our churches.

By David B. Capes in Uncategorized on April 4, 2014.
← Are the Miracles in the Bible Simply Myths and Legends? Jesus and the Easter Bunny →