Paul wanted the Philippians to know that his imprisonment had not stopped the advance of the gospel.  First, the whole praetorian guard was abuzz with the message of Jesus the Anointed due to Paul’s influence.  Second, other preachers (“brothers”) had been emboldened despite Paul’s chains; they spoke the word of God without fear, motivated by love (1:12-14).  Third, for reasons unknown, some had taken an adversarial posture to Paul and were attempting to exploit his imprisonment and thereby inflict him with their own injury (1:15-17).   Despite their partisan preaching, the imprisoned apostle was encouraged and pleased.  The reason is this: no matter what their motivations were, Christ was being preached in places and in ways that promised a great harvest for the gospel.

If you read between the lines of Paul’s letters, it seems he expected to be released soon from his chains.  The Spirit of Jesus working together with their prayers would lead to his deliverance.  Still, what he wanted more than anything was to honor Christ in his body, whether in life or in death.  He wrote famously: “for me to live is Christ, to die is gain” (1:21).  This was his dilemma; he was pressed between the two (1:23).  On the one hand, he could go on living; life in the flesh, even in prison, meant that Christ would have his body through which to live.  On the other hand, he desired to depart this flesh and to be with Christ, a state far better for him personally and perhaps even the gospel.  If his imprisonment had meant the advance of the gospel on so many fronts, how much more his death might lead to even greater progress.  Some have wondered whether Paul was contemplating suicide or forcing his martyrdom, chosing the time and place of his death rather than falling prey to Roman cruelty on their terms.  This sounds strange to modern ears, but in the ancient world suicide did not have the stigma we associate with it.  In some cases it was a “noble death,” the lesser of two evils.[1]  What seems sure is that Paul felt he had some control over his life and death at this time.  For now, he would choose life, not for his sake, but for the sake of the gospel and for the Philippians (and likely his other churches). 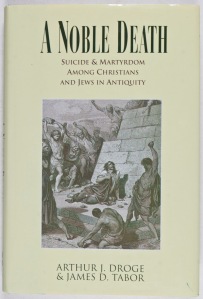 Philippians 1:27-  Live consistent with the gospel

So Paul was confident he would live, be released and make his way back to Philippi to aid in their progress and joy in the faith.  Whether he was present or absent, he urged them to live lives worthy of the gospel.  For Paul this meant a radical unity of spirit and mind in the presence of diversity, the continual threat of self-interest, and the potential  threat of active opponents (1:27-30).  The gospel of reconciliation required that they stand firm in one spirit and strive together, as if they were a single soul, for the sake of the good news.  Not only had God granted them the gift of faith, leading to salvation, but they also were gifted to suffer for Christ’s sake.  This meant entering into Paul’s sufferings and imprisonment as well as facing their own adversaries.

The unity Paul desired for the Philippian church was consistent with the call they received to be “in Christ.”  It was not baseless or powerless.  It acknowledged the presence of Christ’s comfort, the motivation of love, the participation and power of the Spirit, and the reality of divine mercy and compassion (2:1).  Given these spiritual resources, it was well within Paul’s right to ask them to fulfill his joy by having the same mind, same love, and the same soul (as it were).  On a practical level, this meant (a) doing nothing from selfishness, (b) considering the surpassing value of others over oneself and (c) looking out for the interests and needs of others rather than constantly self-seeking.  The most persistent nemesis of the church’s unity is found in the members’ personal agendas and lack of humility.

Next time we will consider the Philippian hymn, an amazing passage which many believe was an ancient Christian hymn sung or chanted in churches around Paul’s mission.  With it Paul makes Jesus “the lordly example” of what a life of humility and service look like.