With the death of my friend and mentor, Larry Hurtado, on November 25, 2019, I thought I’d take an occasion to re-read and blog through his classic book, One God, One Lord: Early Christian Devotion and Ancient Jewish Monotheism. It has been published in its 3rd edition recently by Bloomsbury T. & T. Clark, as a part of its Cornerstones Series.  When I visited Larry in early October, he gave me a copy and signed it “for David, trusted friend, Larry.”  With his passing, it is a hallowed possession. 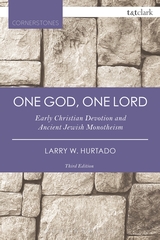 I have spent seven posts blogging through the preface to the 1998 edition.  You can read those earlier posts beginning in December 2019.   Now I turn my attention to the epilogue of the book, which Larry wrote for the 3rd edition.

Larry’s interest in the questions that eventually became ONE GOD, ONE LORD came together for him not long after he finished his PhD.  He felt it was time for a substantial engagement with and against Wilhelm Bousset’s classic book KYRIOS CHRISTOS.  There were two overarching contentions in Bousset’s book.  First, one of the most significant historical developments of early Christianity was the emergence of the ‘Kyrios-cult,’ that is, the treatment of the risen/exalted Jesus as “the rightful recipient” of worship.  Second, Bousset argued that this development did not take place among the first Jewish followers of Jesus in Judea and Jerusalem; instead it happened in places like Antioch and Damascus under the influence of pagan worship where there were gods-a-plenty to be honored.   Jesus became just another of those gods.  Hurtado agreed with the first conclusion but not the second.

Hurtado thought that advances in knowledge and the availability of many Jewish texts—texts not available to Boussett—had rendered his historical judgments in error.  For example, Boussett thought the title “Son of Man” was a common title in second temple Judaism, and thus available for the earliest followers of Jesus to express his significance; it designated an eschatological figure who would appear to bring judgment and redemption to the world.  Therefore, the earliest Christians confessed Jesus to be the “Son of Man,” not the Lord (kyrios) because that word was too closely allied with the name of God and pagan gods; it could be thought to oblige worship of Jesus.  Kyrios-Christ devotion did develop, of course, at a secondary stage since Christianity eventually moved away from its Jewish moorings.  Further study has demonstrated, however, that Bousset was not correct; the “Son of Man” was not a familiar title in second temple Judaism.  Likewise, it is unlikely to have become a confession: “Jesus is the Son of Man.”  In the NT Jesus himself is the one who uses the expression of himself not his followers.

The Achilles’ heel to Bousset’s argument (that the Kyrios-cult developed at some secondary stage away from Jerusalem and Judea) is 1 Cor 16:22: maranatha (Aramaic expression transliterated into Greek letters; cf. Rev 22:20). Most scholars take that as an acclamation, “Our Lord comes,” or an invocation, “Come, our Lord.”  If Paul is using an Aramaic phrase in a Greek letter to a congregation in Corinth in AD 56, it is likely that the original, “primitive” church in Judea/Jerusalem referred to Jesus (the risen and coming one) as the Mareh (Aramaic for “Lord”).  Aramaic was the language of the first Jewish communities/ synagogues.  Research by various scholars delving into Qumran materials confirms that the term Mareh could refer to God as a divine title, in ways similar to kyrios in Greek.  Hurtado took this as evidence that devotion to Jesus begins not in Greek-speaking Antioch but in Aramaic-speaking Jerusalem.

ONE GOD, ONE LORD came out of the impulse that Judaism not Hellenism provided the rich seedbed from which the Jesus movement sprung.  It began in a Jewish context and drew initially from that background to express their beliefs regarding Jesus and his significance.  Rather than examining the worship of Jesus in light of the Greek world with all their gods, Hurtado understood the challenges involved in investigating Christ-devotion in light of Jewish beliefs and practices.  That was the essence of his project.