Tom Holland is a wonderful historian and writer who you need to know. He cut his teeth on Greek and Roman culture, which of course intersects with the origins of Christianity.

Here is a link to a good article and series of podcast videos that give a bit more information about him. One of those videos features N. T. Wright.

Paul is not starting a conversation about house management—that had been going on for centuries—he is however joining the conversation from a new creation vantage point. Perhaps the most famous and influential commentator on family life had been Aristotle (Politics, 1.12-13). Aristotle and other philosophers of his day believed that man was more fit to rule than woman by nature. There were different kinds of rule, of course—a king’s rule of his subjects, a master’s rule of his slave, a father’s rule of his child, and a husband’s rule of his wife—but nature had equipped freemen to lead even as it equipped women, children, and slaves to be subordinate. Inequality, not equality, is the working assumption. From their perspective, preserving family order established good order in society. Keeping the masters, wives, and children in subjection to the paterfamilias (male head of household) was vital to the common good. 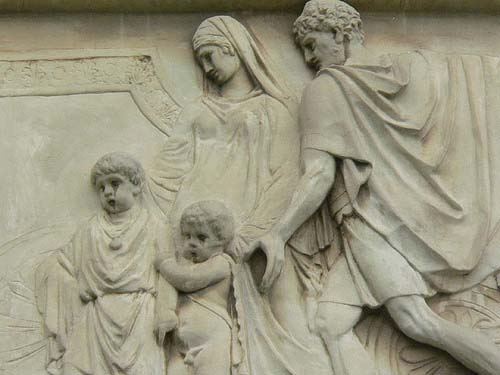 Now this probably rubs you the wrong way, but it was the social backdrop to everything Paul has to say on the matter.

Essentially, Paul’s directives to the family challenge Aristotle’s teaching and logic about the hierarchy. If there ever was a hierarchy imposed by nature or by the fall (Genesis 3), then Christ has effectively lifted it and given us an example of lordly service (Phil 2:5-11). The Christian disposition is one of mutual submission (Eph 5:21) and consistently looking out for the needs of others (Phil 2:1-4).

The new creation had radically redefined the social order and therefore family relationships (Gal 3:28; 1 Corinthians 7). This is more than “equal access” to God; it is the foundation of the new creation where God is Father, Jesus is elder brother, and all who are adopted in the family of God live as brothers and sisters.

The basis of this new order is not a hierarchy imposed by nature but the Lordship of Jesus. These instructions are to be lived out “in the Lord.”

It was Paul’s habit to address the “subordinate” members of the household along with the paterfamilias. This was uncommon because the typical pattern for most moral instruction outside of the NT was to address the male, head of house expecting that he would, of course, lead the slaves, children, and wives to proper conduct. So Paul’s direct address to wives, children and slaves is unusual if not unique. Margaret MacDonald calls it “a distinctly Christian innovation” (The Power of Children: The Construction of Christian Families in the Greco-Roman World, Waco, TX: Baylor University Press, 2014, p. 7-8).

The apostle’s direct address does two things. First, it demonstrates that Paul’s authority extended to the wives, children and slaves of other men. As such they are fellow members of the church and not just someone else’s property living in the shadows. Second, it confers upon the “subordinate” members of the family a kind of self-determining, moral authority. Wives, children, and slaves are responsible before the Lord for their behavior. In other words, Paul treats those deemed by society as lessers as moral agents equal to the greaters. Before we get carried away, we should probably recognize that these codes represent things as they should be not as they were in the rough-and-tumble of daily family life. Aspirations are seldom fully realized.