In 2012 the best-selling book in Norway is a new translation of the Bible–yes, you heard that right, the Bible.  The Norwegian Bible is even outselling Fifty Shades of Grey.  Now this has caught a lot of people off-guard because Norway is one of the most secular countries in Europe, and Europe—as you may or may not know—has only a thin veneer left of its Christian cultural heritage.  Only about 1% of Norway’s 5 million citizens bother to go to church. 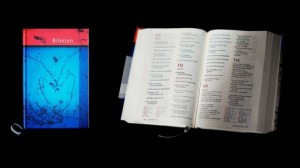 And there is something else.  In one of Oslo’s most popular theaters there is a new, long (six hour) play called “Bibelen,” the Norwegian word for “Bible.”  Thousands of people are flocking to see the production that modernizes the Bible’s stories for a skeptical 21st century audience.

In 2000 work started on revising the 1978 translations. Five years later the New Testament was published and the full Bible in both languages will be finished in 2011. In addition to the principle of using a modern and easily understood language, the translators now emphasize a much closer connection to the original texts in Hebrew and Greek.

The process they used was unique:

In addition to three full time translators, the Bible Society used scholars in Greek and Hebrew, theology and professional authors and poets, who are specialists in the Norwegian languages. Their participation in the project from stage one, has been an exciting and important feature. In addition to give the translated Norwegian texts a very high linguistic quality, it gave the new Bible broad publicity. It has been remarkable to see how nationally famed authors and poets appear in media as Bible translators, strongly recommending the new translation and talking with enthusiasm about their own participation. Their participation has underlined the cultural importance of the Bible in modern society.

Once the translation was complete, marketers packaged the translation in a variety of fresh and relevant ways.  For teenagers they came up with pink leather and denim covers.  For adults, they worked toward a more sophisticated look and feel. 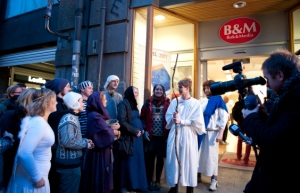 Norway’s heritage is Lutheran.  Until last year Lutheranism was the official state religion, but an act of Parliament changed all that.  Government leaders made “official” what everyone already knew; Norwegians have little time and interest in church.  Everyone thought that they would little interest in the Bible too.  But the new Norwegian translation has certainly challenged that.

Why the change?  Some people are speculating that now people are immigrating into Norway from Africa and the Middle East and bringing a variety of religions with them, people from Norway are taking a second look at their cultural heritage.  They are rediscovering some important things in the Bible, things they have decided not to forget.  As one writer who worked on the project said, “Thoughts and images from the Bible still have an impact on how we experience reality.”

What I find interesting is how similar the new Norwegian Bible translation sounds to “The Voice.”  There are significant differences in how the Norwegian Bible Society went about it, but the concept of inviting writers and poets to work alongside Greek and Hebrew scholars to create a  new translation is apparently an idea which dawned on them and Ecclesia Bible Society/Thomas Nelson at about the same time. Is it coincidence?  Perhaps.  But I’m betting on Providence.