Tom Holland is a wonderful historian and writer who you need to know. He cut his teeth on Greek and Roman culture, which of course intersects with the origins of Christianity.

Here is a link to a good article and series of podcast videos that give a bit more information about him. One of those videos features N. T. Wright.

A team of archaeologists from various schools have been digging around in northern Ethiopia (from 2011 to 2016).  They have discovered the oldest known Christian church in sub-Saharan Africa: it dates back to the 4th century AD.  It and other discoveries indicate that Christianity came to the Aksumite kingdom earlier than anyone had thought.

The ruins of the church were found 30 miles NE of Aksum, the empire’s capital. Aksum emerged as a trading center in the first century AD linking the Mediterranean, east Africa, Arabia, and points east in extensive commerce.  The church was built in the 4th century AD, roughly during the time when the Roman emperor Constantine I decided to turn a more tolerant eye to Christianity.

The kingdom began to decline in the 8th to 9th centuries AD and rebuffed attempts to convert the population to Islam.

What researchers have discovered is the earliest physical evidence for Christianity in Ethiopia.  Today nearly 50% of all Ethiopians belong to the Ethiopian Orthodox Tawahedo Church.

The church is built on the footprint of a Roman era basilica (60’x40′).  Archaeologists found other things as well: a pendant made of stone carved with a cross and an inscription in Ethiopic asking “Christ [to be] favorable to us.”

For years scholars have known that trade routes played a key role in moving Christians and their gospel through and beyond the Roman Empire.

I received an email from someone recently.  He relates an indictment against mainstream Christianity from a messianic Christian perspective.  I’ve changed the names and edited slightly our correspondence (to protect the innocent).

Hello, Dr. Capes! My name is Cody Hall, and I am a student.  I looked at your information on the HBU website, and your interests and publications have prompted me to come to you for a few answers (via email).

I’m sure you have heard a lot about Messianic Judaism and are familiar with many of their arguments. But in case this particular Messianic congregation is unique, here are its beliefs:

1) Christianity as we know it is based entirely on an incorrect interpretation of Paul’s writings.  Particularly, we incorrectly misread Acts 15 and Galatians.

2)  Christianity is hypocritical, choosing to:

A) affirm the Ten Commandments while rejecting other Mosaic law (such as Kosher laws, Sabbath, etc.)

C) using religious language based in paganism, such as “Lord”, “God”, “sacred”, the Trinity, etc.

4) Jews and Gentiles are now one in the olive tree. When you are grafted in, you also inherit the laws of Moses.

5) The “lawlessness” described in the NT are those who do not observe Torah. These are the people who will come before the Lord and be turned away in their “lawlessness”.

My parents have been members of this congregation for many years. Their congregation is called **********   and they have a website. I used to be very sure this was all entirely incorrect, but being home for the summer has started to fill me with doubt. My parents seem very happy and have many kind, new friends.  It appears many evangelical Christians are converting to messianic Judaism. I also do see glimmers of truth and hear some fair critiques of mainstream Christianity (some even I have thought). I’m sorry this is a bit lengthy, but I hope that maybe you could share some wisdom on the matter. Thank you very much for your time.

Thanks for your email.  I have a number of friends who are messianic Jews so I’m quite familiar with the movement.  However, I’ve never heard of a group that looks down so judgmentally on others calling them hypocritical, incorrect, error-filled, lawless, etc, for not agreeing with their interpretation.  I’d be wary of any group that thinks itself so “right” and everyone else so “wrong.”  God resists the proud but he gives grace to the humble. However we hold faith in the Lord Jesus, we should do so humbly.

The fact that your parents and others are happy in this movement and have good friends in itself is not a measure of its truthfulness.   Nor does it guarantee that they are faithfully representing what other Christians believe. 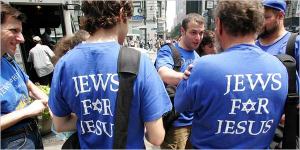 I’d be glad to discuss these issues with you in some length in person, but let me give a basic response to a few of the things you mention.

1.  This group claims Christians are “hypocritical” because they keep the ten commandments while rejecting other aspects of the Mosaic law.  I would suggest humbly that most Jesus-followers and even orthodox Jews practice Mosaic law selectively. Do women in this group follow all the laws of menstruation?  Do they put to death children who insult their parents as the law requires?  Do they not wear blended clothing (cotton and polyester, for example)?  Do they forgive all debts in the year of jubilee?

There are principled reasons why Christians read Genesis through Deuteronomy the way they do.  People of good faith try to understand what God was doing, saying at the time.  They take seriously that God made a covenant with the ancestors of Abraham on his way to redeem the world and that the stipulations and laws of that covenant deal specifically with the children of Israel.

Christians take seriously the new covenant established by Jesus with his church.  You are probably aware of the Sons of Noah, and the seven laws of Noah.  The seven laws of Noah are for righteous Gentiles.  There was no expectation that non-Jews had to follow all 613 commands; seven were sufficient.  Again, I suggest humbly that most messianic Jews, Christians and orthodox Jews practice God’s law selectively.

That said, I have full confidence that the Greek translations we have of Jesus’ Aramaic-speeches are faithful and true to what Jesus said.  God is able to inspire, protect and preserve his Word in whatever languages he chooses.  I study and use the original languages (Greek, Hebrew, Aramaic) but do believe that God can speak to people in other languages too.   Now I do think that Jesus’ native tongue was Aramaic but there is good reason to think historically that he could also speak Greek since he lived in a bilingual area (people who speak Spanish at home often speak English at work or in the market).  Since Americans can often only speak a single language, we don’t realize how people raised in a different environment can speak multiple languages. But they did.

3.  I would differ—as would the majority of scholars and serious interpreters—on some of the interpretive issues mentioned in your email.

Regarding Acts 15. The purpose of Acts is to show the progress of the Jesus movement from Jerusalem to Rome and from people group to people group (Acts 1:8) (Hebraist Jews to Hellenistic Jews to Samaritans to godfearers to Gentiles).  An important moment comes when trying to figure out what Gentiles must do in order to enter the movement and thus enter into Christ.  Did they have to live like Jews (technical term is judaize) or could they come as Gentiles.  I take Acts 15 as Hebraist Jews deciding to allow Gentiles to enter the community and thus into Christ/baptism/table fellowship without full adherence to the law (circumcision, kosher diet, Sabbath and festival observance).  The four things asked by James in Acts 15 are in tune with the 7 laws of Noah, perhaps a version thereof.  The reason given is because in all the cities where they will be going there are synagogues and Jewish communities.  This is the language of accommodation.  In order to keep from offending Torah-observant Jews please refrain from sexual immorality, idol worship, eating things killed via strangulation, etc. Perhaps the key is James’ quotation of Amos in 15:16ff.  The dynasty of David is to be reestablished (Jesus), Israel is to be restored and the exile ended, and the full inclusion of “the nations” is what God has in mind.  Ultimately the church is a countercultural movement of Jews and Gentiles united in Jesus.  So what unites them is Christ not necessarily uniform practices.   This certainly complicated.  There are many good commentaries on Acts which may help.

I applaud Jesus-followers who attempt to understand his Jewishness and prefer to worship in messianic congregations. I am concerned, however, to think that they would think so highly of themselves and so badly of others who disagree with them.  I concur with you there are glimmers of truth and we, as Jesus-followers, need to be self-critical and always reforming our faith to conform to the image and likeness of Christ.  There are other messianic congregations that would have a more generous view of more mainstream Christianity.

I hope this helps.  I’d be glad to visit with you on this and other matters if you’d like.  Let me know.

How would you answer some of these objections?