What were the “last words” of Jesus?

Recently, my rabbi friend, Stuart Federow, and I got into a disagreement.  Well, actually, I didn’t argue with him; I just listened to his criticisms the Christian faith.  Now, I love Rabbi Federow, he is one of my best friends; but when he speaks about the Christian faith, he often gets it wrong.  Yet when he speaks about his own faith, he gets it right.  I guess that is the way it ought to be.

Federow essentially stated his opinion on the unreliability of the NT Gospels based on the “last words” of Jesus.  His argument was that each Gospel has a different saying as the “last words” of Jesus and therefore their accounts of his life cannot be trusted.  Accordingly, Jesus could not have had multiple “last words.”  If Jesus had any last words, then the Gospels should agree on them.  If they are inspired by the Holy Spirit, then there must be four Holy Spirits since there are four accounts.  So Christians should worship six figures, not three: Father, Son and four Holy Spirits.  That was a part of his mocking of the faith.  Now, we are good friends, so his mocking is not malicious.

Now let’s get out the facts.  In one sense, Rabbi Federow is correct.  The last “recorded” words of Jesus in each Gospel are different.  Now, to be clear, we are speaking about Jesus prior to his death by crucifixion.  Here they are in a random order:

A few notes.  First, the last recorded words of Jesus in Mark agree with Matthew.  So there are not four variations, as the rabbi claimed, there are three.  Second, in both Mark and Matthew, we are told that bystanders misunderstand Jesus and think he is calling for Elijah  to come.  So they ran and filled a sponge with vinegar and gave it to Jesus. Later Mark and Matthew agree that Jesus cried with a loud voice and breathed his last.  The point is that there is an interval of time between Jesus’ cry of dereliction and his cry leading to death.  How much time? We don’t know.  Did Jesus utter other words in the interval? Perhaps.

The fixation we have on someone’s “last words” is a modern phenomenon; it should not be imposed upon ancient people or ancient biographies. I say fixation because that is what it is.  I’ve often heard people at funerals ask: “what was the last thing Sandra said before she died?”  Stories are shared as part of the grieving process.  You can google the “last words” of nearly any famous person and the Internet has the answer.  Here are a few examples.  These are the last recorded words of these people.

Clearly, we have an interest in the last words of famous people, and Jesus is one of the most famous of history.  But we must be careful not to insist that the first followers of Jesus have the same interests as we do.  That is a kind of cultural arrogance that insists the way we think about these things is superior to anyone else.  We condemn, criticize or mock cultures and people who do things differently. Scholars are clear that the NT Gospels are examples of ancient biography, and ancient biographies do not operate the way modern biographies do.  They have a different set of priorities and purposes.

Let’s be clear.  Nowhere does any Gospel say, “now these are the last words of Jesus . . .”  The writers aren’t thinking in those terms: “Oh, I must record the exact, last words of Jesus for posterity.”  No.  They have a story to tell, and they tell it to the end.  If we know the themes of each Gospel, then we can understand why they tell the story of Jesus’ crucifixion the way they do.  The process of dying and Jesus’ time on the cross took about six hours. He probably said a lot of things from the cross that are not recorded.  Furthermore, as he neared the end and his voice grew weak, he was probably heard to say a number of things that were not understood as Matthew and Mark indicate.  The Gospel writers give us the kinds of things Jesus was saying from the cross.  Jesus was remembered to have said a number of things from the cross, and each Gospel writer focuses on the one that fits his theme.  None claims to give us the exact “last words” of Jesus.

Now I haven’t run any of this by my friend, Mike Licona.  He has written an important, new book published by Oxford Press (2016) entitled Why Are There Differences in the Gospels? What We Can Learn from Ancient Biographies.   I’d be interested in his take on the “last words” of Jesus.  I’ll be doing a review soon of his book.

A few weeks ago I announced to my president that I had accepted a position as Associate Dean in the Biblical and Theological Studies Department at Wheaton College.  Dr. Furr, always gracious, received the news with a kind disposition.  So my wife and I will be moving to Wheaton, IL, in mid-summer to take on those responsibilities.

The decision to leave Houston Graduate School of Theology (HGST) for Wheaton was a difficult one.   The gravity of family, friends, ministry, and familiarity with Houston were not easy to break.  My family has lived in and around Houston for 27 years.  All our children and grandchildren live close by.  And we have a grand-daughter on the way!  She should make her entrance in less than one month.  In addition, the mission of HGST is very important, and its challenges are great.  Still, President Furr has done an excellent job setting the goals and making things happen here.

I’m looking forward to working with President Ryken, Provost Diddams, and the interim Dean of Humanities, Dr. Lynn Cohick.  The mission at Wheaton and its flagship status make it a desirable place for people to study and for faculty to teach & research.  I hope to be able to go there and contribute.

More details will follow.  Prayers are welcome as my wife and I make the transition.  From time to time I’ll post about our progress.  If you have any recommendations about living in Chicago, let me know!

Stefana Dan Laing has recently published her book, Retrieving History: Memory and Identity Formation in the Early Church (Baker Academic, 2017).  Laing is the assistant librarian at Southwestern Baptist Theological Seminary (Houston, TX) and has taught for HGST for a number of years.  She has also taught at Houston Baptist University and Beeson Divinity School (Birmingham, AL).  She earned her PhD at Southern Baptist Theological Seminary in church history, with an emphasis on the first few centuries of the Church. 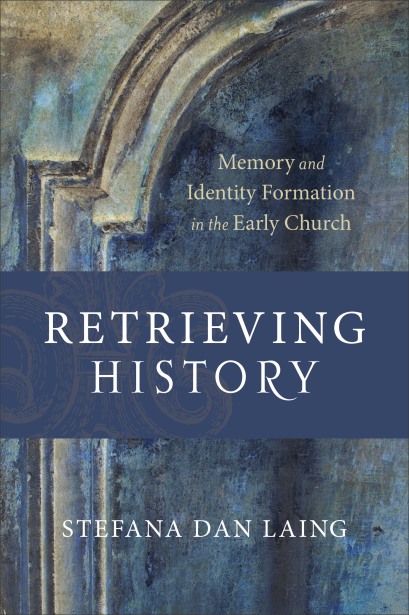 Laing’s book is not just an introduction to first five centuries of the Church; there have been plenty of them of late.  Her point seems to be that here we are as Christ-believers in the 21st century and our identity is formed more by our culture than by our faith.  She thinks, and I agree, that the Church has an identity crisis.  We reflect more of the culture today than our own heritage.  Culture today has a tendency to focus on who or what is trending.  It is whatever is happening at the moment.  She asks a great question: would the saints of the past be able to tell the difference between Church and theater?

She writes: “While Israel was admonished to ‘remember’ and to stand at the crossroad seeking out the ‘ancient paths,’ the church today is merely looking around rather than looking back.”

Laing’s book has a lot to do with memory.   But you can’t remember what you didn’t know in the first place, so she helps us understand our past.   She helps us to “retrieve history,” with its beauties, wonders, and warts.  She has chapters on the martyrs, the saints, and what it means to write a history.  History is more than “what happened,” as Laing delicately shows us.

Dr. Laing is not only concerned with the shape of the church in the second through fifth centuries (AD); she is deeply concerned with  the shape of the Church today.  She wants to help us through the current identity crisis by helping us know from where we have come.  To borrow a line from “The Lion King” (and adapt it just a little): “We are more than what we have become.”

This is a book that can and ought to be on your reading list this summer.  Not only do people like George Kalantzis, Bryan Litfin, and Paul Hartog recommend it.  So do it.  I can’t wait to really sink my teeth into it.