Most pastors I know, and a few laypeople, have a particular book in their library.  It is typically referred to as “Vine’s Expository Dictionary of New Testament Words.”  It was originally published in four volumes but is available now in a single volume.  Vine’s refers to W. E. Vine.

Recently a friend of mine, Frank Couch, sent me some information which I find compelling and likely true, but I’ve never read it before.  It is in a document from Robert F. Hicks, and it indicates that when Vine was writing his now-famous book, F. F. Bruce, who was destined to become one of the finest NT scholars of his age, was hard at work with him. 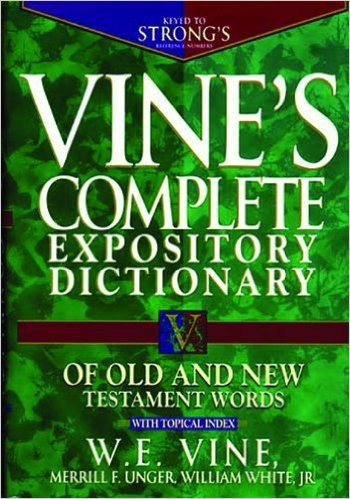 Hicks it seems is now in charge of the works of the late W. E. Vine.  He knows Vine’s immediate family and his personal secretary, John Williamson.

Hicks came to understand through his contact with the surviving family members and his secretary how important F. F. Bruce was to proofing, correcting, checking and adding to Vine’s important work.  Bruce and Vine had a great deal in common.  They both belonged to the Brethren Church.  In the USA, this denomination is known as the Plymouth Brethren.  Both men also had a good deal in common academically.  Both trained in the Greek classics.  Both were well versed in textual criticism and knew the Greek manuscripts behind the New Testament.   In addition, both scholars knew well the Greek Old Testament and were familiar with how NT writers read and incorporated the OT into their letters, history and Gospels.

From what Mr. Hicks relates, F. F. was a major contributor to Vine’s Expository Dictionary, a bit of information which I did not know but I now pass on to you.   I have to admit that I felt I graduated on from Vine’s decades ago when I picked up my copy of Kittel’s Theological Dictionary of the New Testament.  As Bruce himself notes in the forward  to the single volume versions of Vine’s:  “this Expository Dictionary comes as near as possible to doing for the non-specialist what is being done for the specialist by Kittel’s encyclopaedic Theological Dictionary of the New Testament.”  I now repent in sackcloth and ashes because I’ve had a chance to go back to Vine’s and see what a massive and important work it is, even if it is a bit dated.  Vine’s finished his work in the late 1930s, so it is nearly eighty years old.

Vine himself gives praise to Bruce in the Preface to the 1939 edition: “It is with a sense of deep gratitude that I express my indebtedness to a friend Mr. F. F. Bruce, for his wholehearted assistance in going through the typescript and making corrections and valuable suggestions previous to its being printed, and in proofreading subsequently, whose efficiency, as a classical scholar, and whose knowledge of the originals, have enhanced the value of the work.”

The book is published today by Thomas Nelson Publishers.  Vine’s work in the NT has been supplemented by Nelson’s Expository Dictionary of the Old Testament, edited by Merrill Unger and William White.

Almost everyone these days shows up to class with a computer.  I’m not sure exactly what people do on them because I only see lid of the computer; the screen is pointing away from me.  They could be checking their email or posting on Facebook or, please God, they could be taking notes or keeping up with the class PowerPoint.

There is some new research which says that the act of writing is better than typing on a computer or other digital device when it comes to learning and retaining information.  Why? First because writing engages a different part of your brain, a part more suited to memory and learning.  Second, writing forces you to process information in a different way.  In other words, it forces you to think more about what you are doing.  I’ve seen secretaries type letters and then when you ask them what was that letter about, they had no idea. Third, research shows that it creates a better pathway for your memory and helps to facilitate recall.  Last, writing things down is a different kind of kinetic experience (moving) which gives you an edge when it comes to remembering and understanding concept.

Now, I have to admit that I have sensed this for a while, but it has been confirmed by a number of things I’ve read recently from Michael Hyatt, who is a leadership guru and a giant techie.  Still he has had to admit that going back to the old fashioned way of taking notes and writing down tasks is superior to just typing it on a screen.

One last thing.  I alluded to it earlier.  Computers and technology have a way of distracting us from what we should be thinking and doing.  We’ve all seen families out to eat in a restaurant, and all are on separate devices.  Instead of talking to one another and enjoying the meal together, they are distracted by what might be the phone.   I have seen students on Facebook or email in class instead of being on track with a lecture or class discussion.  Not a pretty sight, especially if you’re the professor.  These devices do one thing well; they distract us from what is truly important.

So instead of going to Best Buy and spending $700 to $1700 on a new computer for class, just go to Walmart spend about $7 on a notebook and a good pen (or pencil).